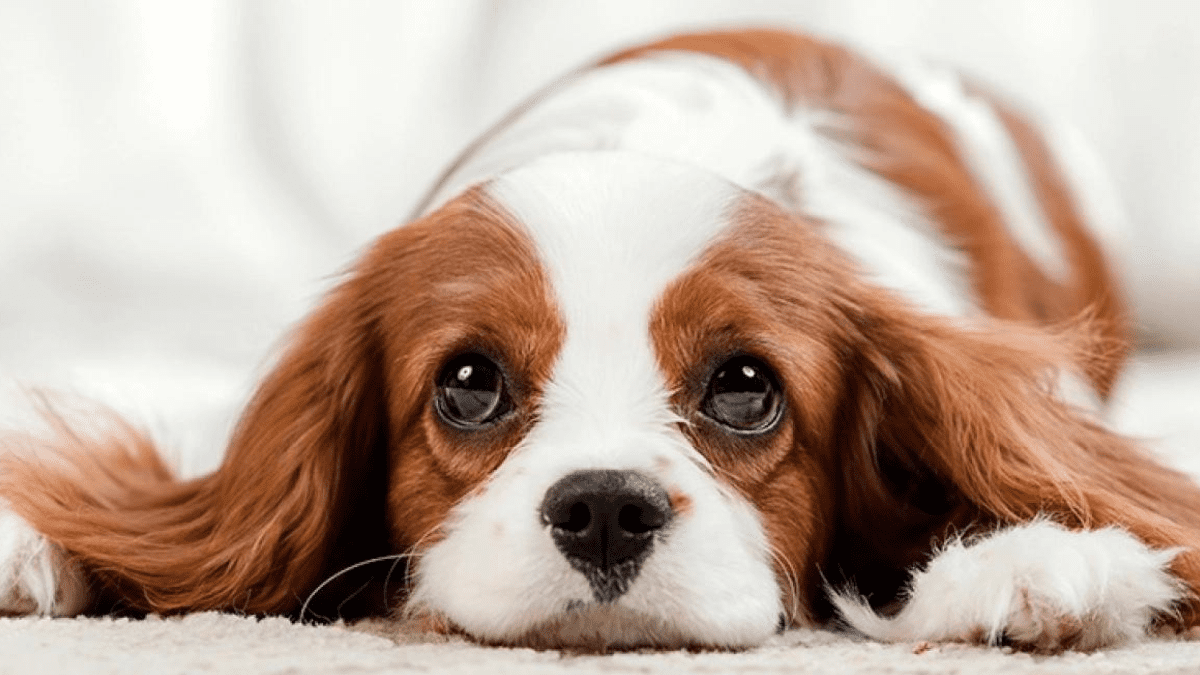 It is common to see a tear fall from the eyes of his dog, which we instinctively translate by the expression of great grief, as is the case with humans.

In truth, tears in a dog are the symptom of something else entirely, and to confuse it with pain is equivalent to anthropomorphism, that is to say, to attribute human qualities to your dog.

Indeed, the human is, for the time being, the only living being who communicates his emotions by crying hot tears, whether when he is afraid, happy, or angry.

In animals, sadness, joy, and distress can also cause crying, but that will not translate into tears.

In dogs, tears are abnormally flowing eye conditions and are not caused by any emotion.

The flow of tears on the dog’s face, a phenomenon that bears the medical name of epiphora, is. Therefore, a defense mechanism automatically triggered by the dog’s body tries to protect itself from infection.

Tears have the function of washing the eye to evacuate foreign bodies or pathogens that may stick to it.

A common cause of epiphora in dogs is conjunctivitis, which also causes swelling of the eyelid, reddening of the sclera, pain, and itching, and other symptoms of inflammation.

Conjunctivitis is an inflammation of the conjunctiva, the translucent tissue that covers the inside of the eyelids to isolate the eyeball from external pathogens.

It is not a disease in itself since conjunctivitis can be caused by multiple environmental, pathological, and even congenital factors.

Causes of tearing in dogs

The external causes of epiphora in dogs

Since tears are intended to clean the dog’s eye, they are automatically secreted in abundance when the latter is the victim of an attack.

In this case, the master can detect the disturbing element by analyzing the environment of his dog, especially when the aggression comes from external substances or odors.

Smoke, strong wind or clouds of dust are elements that can make your pooch cry in order to protect his cornea.

A foreign body, trauma or the projection of an irritant in the dog’s eye can also cause an influx of tears to calm the irritation caused.

Congenital causes of epiphora in dogs

Brachycephalic breeds are likely to present disorders of the lachrymo-nasal system which allows tears to escape.

Pugs, Boxers, Bulldogs or Pekingese will therefore be more likely to cry profusely because of the specific morphology of their skull which prevents the proper flow of their tears (passive epiphora).

Some small breeds, such as the Poodle and the Bichon, can also present this type of congenital disorder because of the very domed shape of their skulls.

There is a pathology called ectopic eyelash, also hereditary, which involves a bad positioning of the dog’s eyelashes which irritate his eye and cause persistent tearing.

This disorder can only be corrected by surgery, otherwise the eyelashes grow back again and again, which can cause very serious eye infections.

Relatively similar, distichiasis is also a form of abnormality in the implantation of eyelashes that irritate or injure the dog’s eye.

Similarly, entropion and electropion are two types of eyelid malformations that can cause inflammation of the cornea and make your pooch cry.

Trichiasis, which must be distinguished from ectopic eyelashes, is an irritation of the cornea caused by normally implanted hairs.

Corneal dermoid, also called palpebral, is an anomaly causing the development of a fragment of hairy dermis on the dog’s cornea or eyelid, then irritating his eye.

Bacterial Causes of Epiphora in Dogs

This is the case with keratoconjunctivitis sicca, a very common condition in dogs that is caused by insufficient tear production.

In this case, the dog is crying a thick, opaque substance, which accompanies an irritated, red conjunctiva and a cloudy cornea.

The viral causes of canine epiphora

Certain viruses are the cause of nasal and ocular symptoms, including the famous distemper which causes distemper.

This disease leads to significant tearing and runny nose, sneezing being its main vector of contamination.

Distemper is accompanied by other symptoms: fever, cough and neurological signs when the virus has reached the dog’s central nervous system.

It is a serious and often fatal disease, for which there is a highly recommended vaccine for all dogs to prevent its spread.

Rubarth’s Hepatitis is another viral illness that typically manifests as anorexia, apathy and conjunctivitis that often complicates into glaucoma.

The symptoms then evolve to give way to coagulation disorders and hepatic dysfunctions which can leave lifelong sequelae to the animal.

Often fatal, this disease includes a sudden form, a severe form and a chronic form, against which there is no treatment.

An element often forgotten in the education process

Educating your animal is good, but it is also imperative to think about protecting your dog against the vagaries of life.

If your dog’s tears are not associated with his emotions, he is nevertheless capable of crying to express his discomfort.

The dog’s crying is manifested by long plaintive barking which does not deceive anyone, as well as high-pitched moans, various complaints… And a number of “non-verbal” signals.

It is often possible to read your doggie’s sadness on his face, the dog displaying facial expressions that are often expressive enough to communicate with his peers, as with his master.

His posture also says a lot: if your dog remains prostrate on himself, isolates himself or shows signs of appeasement, it is because something is bothering him.

By looking a little further into canine psychology, we see that a dog has many ways of crying, without actually shedding tears.

See also  From boarding to arrival, how to travel with a dog by plane?

In order for your dog to stop complaining or suffering in silence, you have to take the time to look into the causes of his discomfort and not just assume that your dog is “jealous”, “capricious” or “resentful”. , emotions that do not exist in him.

Similarly, do not believe that your dog cries to get your attention on a whim: if he asks you, it means he needs it.

A dog who cries to claim attention or games should therefore not be reprimanded, on the contrary the master must question himself and consider that, despite all his efforts, he probably does not spend enough time with him. his dog or missed some of his needs.

It is also possible that your dog cries because he feels discomfort or physical pain, as is unfortunately often the case with old doggies who howl all night because of their osteoarthritis.

Older dogs also gradually lose their senses and can understandably feel completely disoriented when their sight, hearing, and sense of smell diminish.

They are then likely to cry to express their anguish and seek comfort from their beloved master.

Anyway, a dog only cries when he has something to say. It should therefore never be ignored, and it is in good taste to start with a veterinary visit to rule out any injury or illness that would make him suffer.

The dog’s tears and crying are two completely different phenomena that should not be confused to find the cause of the animal’s discomfort.

Tears are often a sign of an eye disorder that can be congenital, caused by a foreign body, or caused by a pathogen (bacteria or virus).

In case of illness, we often observe associated symptoms, but this is not always the case, and you should not wait too long before taking your dog to a veterinarian.

Worsening some eye infections could cost your dog his sight, and some viruses that cause watery eyes, such as distemper, could cost him his life.